Project Canterbury is undergoing an appearance and structure redesign. Currently the site is hand-coded and the organization maintained manually. Moving forward, we are looking at moving onto Wordpress, a content management system that will allow for increased flexibility. This current site is a demo of the style that will be applied to the Wordpress platform, and gestures toward the structure of information that will be implemented in the new site.

The design is minimalist, but gestures toward the older print traditions in which many of the pieces were originally produced. The colors were chosen to reference The Book of Common Prayer. The fonts are standard web-fonts, except in the header and navigation. The main focus of the piece pages is the content itself, and the print style sheet will allow for easy exporting of the content. Wordpress also provides helpful tools for enabling conversation and community for users. The goal is that the design here described and the structure provided by Wordpress will extend the appeal and functionality of the current site.

Through the Church Door 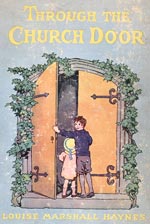 All little children here and there,
Beside the fire and everywhere,
With happy eyes of brown or blue,
This little book is meant for you!

The first time that I went to church
I was baptized, you know,
A tiny baby--brought to God
To learn how I should grow.
They made me God's own child that day,
And marked me with His cross,
To carry it through all my life
(It does not show, of course).

I don't remember that day now,
But mother does, you see;
'Twas then she chose my Godparents
Who stood up there with me
And held me in their arms that time;
They promised for me too
The things the Church is asking me
To try my best to do. 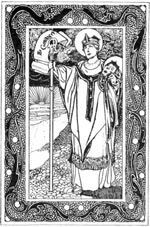 Away up North beyond the Border, in the wild country of Lammermoor, lived a little orphan boy named Cuthbert. An old widow took care of him till he was big enough to go out and earn his living as a shepherd. He was the bravest and strongest boy in all that countryside: none could run so fast as he, or stand against him in wrestling and fighting. But when he became a shepherd, and sat through the long lonely nights on the bleak hills, looking at the stars and listening for the distant howling of the wolves, then deeper thoughts would come into his head. He thought of all the wonder of this great world, and of God who had made it, and of his own little self whom God had made to become like Him. One night he saw a shower of bright shooting stars fall through the sky; they seemed to him like a company of angels who had come to fetch some pure soul to heaven. Next day he heard that just at that time St Aidan had died. So he determined to be a monk.

But in those rough times so brave a lad could ill be spared from warlike exercise, and for a while our Cuthbert became a soldier. Then, when he was still only a lad of fifteen, the country became quieter, and he was free to go. One morning in the Abbey of Melrose the monks heard a visitor knocking at the door. It was Cuthbert, the young soldier, on horseback with a lance in his hand, waiting on his horse for admittance. "I want to be a monk," he said, "will you take me in?" The abbot, whose name was Eata, and the prior were both great and holy men; they taught Cuthbert, and soon they loved him greatly.

The new monk became remarkable for his devotion even amongst those good men. He set himself to the hardest missionary work among the fierce half-heathen Picts and Saxons who lived in their little villages among the mountains and glens that stretch between the Solway and the Forth. There were no rich meadows or cosy farms, and no roads, in those days, but great desolate tracts of country where the traveller had to pick his way along boggy pathways with spear in hand, ready for the robbers who might spring out upon him, Cuthbert would leave his abbey at Melrose for weeks at a time, searching out the shepherds who lived, as he had lived, in rude wooden hovels, or finding his way up into the craggy mountains to little villages where never Christian priest had reached before. Oftentimes he was near to perishing with hunger, and yet he would share his last loaf with a poor man, and however little he had to eat, he always gave part of it to his horse, when he had one.

Project Canterbury is a free online archive of out-of-print Anglican texts and related modern documents. It was founded in 1999 and is an all-volunteer effort; it is not affiliated officially with any church body. An advisory board helps to strategize about the site and to plan its further development.